Dr. Daniel Amen interview: The shrink who believes technology will replace the couch.

Dr. Daniel Amen believes brain scans, not hours talking on the couch, can help cure depression, anxiety, and a host of other mental problems.

He is a charlatan but he might actually be doing something that works. I don’t think his explanation of how it works is accurate but he is very successful and making tons of money. As with a lot of alternative medicine advocates, he is doing something that is scientifically incorrect but is somehow working for lots of patients.

His peers think he’s out of his mind.

He could be a true charlatan who is intentionally ripping people off in order to make money but I think he honestly believes the stuff he is making up. That puts him in a category of alternative providers that I call true believers. In my book Placebo Medicine I explain how the true believers are the dangerous ones. True charlatans want to make sure that no harm comes to their paying customers.

I don’t think he is out of his mind. I think that he is thinking like a human which means not like a scientist. The human brain’s most powerful tool is a logical fallacy called, post hoc rationalization. That means we are good at guessing. We make an observation then make up an explanation. This can still work and humans do it really well. I believe that Dr. Amen did it here.

As an aside, I understand how Dr. Amen got off track. It almost happened to me when I was a neuropsychiatry fellow at UCLA in the early nineties. SPECT scans were new and they were fantastic! For the first time we were actually looking at brain function in a living brain. Especially, when the 3-D SPECT scans came out. I thought they were the coolest thing I had ever seen. I had all kinds of ideas about how to use them.

In addition, there are some rare cases where brain images can detect a frontal lobe tumor that may not have produced enough symptoms to be detected otherwise. In the frontal lobe there is a lot of space for a tumor to grow into without causing obvious symptoms. Sometimes the only symptom is an atypical depression. A brain image is not a routine part of a depression work-up so Dr. Amen’s suggestion that it should be is reasonable. The actuarial at the insurance company might disagree as it would not be cost effective. As a psychiatrist I would say, “So what..”

I would tend to agree with Dr. Amen that we should have a lower threshold for getting a brain image when a psychiatric diagnosis is made. On the other hand, I can’t make the logical leap to conclude that we can use them to treat a routine depression.

I think Dr. Amen helped a kid with a frontal tumor early in his career and that may have influenced his opinion. Remember, Dr. Amen has a human brain and human brains tend to be more influenced by single personal events than by large numbers and statistics. This is especially true for individuals who are prone to fanciful beliefs. Perhaps, like people who attend Oral Robert’s Medical School? (This is just a guess. I don’t really know for sure that Oral Roberts graduates are more prone to embracing alternative treatments.)

In any case, when I learned more about how the technology works and what you can actually conclude about brain function I became considerably less enthusiastic. There is also a tremendous amount of statistical analysis that you must learn and understand if you are going to have any chance of making sense of it. I understood that this was the future of psychiatry but the research was going to take some time.

Dr. Amen began using post hoc rationalization and making up correlations with the pretty images rather than realizing that we needed to do a lot of science to figure out what the images really mean. It is hard to blame him because, God, the 3-D SPECT images look cool! 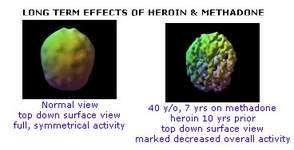 In the case of Dr. Amen, he is a real doctor with a real understanding of brain science but he has taken this legitimate foundation of knowledge and created an empire of pseudoscience. The Washington post has called him the most popular psychiatrist in America. He has done TED talks and has a thriving business including six clinics where people are supposedly improving their brain function with his new and “ground-breaking” methods.

You only have to listen to him for ten seconds or so to appreciate that he sounds like an alternative medicine guru and not like a legitimate physician.

Here is a detailed critique of him written by Harriet Hall, M.D.: A Skeptical View of SPECT Scans
and Dr. Daniel Amen. We know that Dr. Hall is wonderful because of her positive review of my book entitled Placebo Medicine. (I hope you can appreciate the humor in that last sentence.)

Dr. Amen is wildly successful and loved by millions of patients but he is wildly criticized by his peers. His response is, “If I’m defrauding them how would I stay in business for decades, with a success rate that blows everyone else away?”

The answer to that question brings what he is doing into my world which is the subject of this website. He is a successful practitioner of PLACEBO MEDICINE! And that is not an insult.

Even though he is a neuroscientist he likely does not understand what he is actually doing. He either thinks he is ripping people off or that he is so smart that he has discovered a new way to diagnose and treat mental illness that none of the other million or so psychiatrists on the planet thought of.

What he has actually done is to carefully craft a line of BS that is designed to play a human brain as though it was a piano.

His main idea is that a SPECT scan can diagnose and treat a brain disorder. The truth is that these scans are great for research and some clinical situations but do not have a lot of clinical utility at this point in time especially for the kinds of conditions that he proposes to treat. Sometimes they can rule out stuff but so can a much less expensive MRI.

I am suggesting that there might actually be a science in what he is doing. It is not the idea that SPECT scans can diagnose and treat depression. Rather, it is how he is delivering this information. We know from the world of alternative medicine that the way he is talking to patients is consistent with a formula that can get people to have confidence that they will get well and that an authority figure cares about them. Our brains are programmed to be influenced by this kind of communication in a way that will affect our brain chemistry such that it can compensate for insult. It can effect things like pain, nausea, depression or anxiety. This is one of the ways in which the placebo effect can work. And the beautiful images don’t hurt.

The kinds of things that Dr. Amen is trying to treat are mostly things like emotional and cognitive changes which are the kinds of things the placebo effect can treat. He is doing this by the way he is communicating and not by the content of what he is saying.

He is proposing to be able to treat a lot of things that can’t really be treated or things that have large responses to placebo treatment and is generally doing it in ways that are not likely to cause harm. He is definitely over-charging but it may be that charging a lot increases the potency of the placebo effect.

Obviously, if you listened to Dr. Amen describe why his approach works and then listen to a psychologist describe why CBT works you would hear very different theoretical explanations. However, if you stepped back and observed what each was doing with patients as though you were a biologist observing different flocks of birds or herds of horses or schools of fish you might come to the conclusion that the behavior they were both doing was pretty similar. It is this behavior that I call placebo medicine.

Between Dr. Amen’s treatment and CBT I am genuinely not certain which I would choose for myself if I suffered from mild to moderate depression. It may just be that this guy, who most of us consider to be a charlatan, is doing something that is ingenious.

Actually, on second thought, I still can’t advocate what he is doing if he really does not understand it in the way I have described because there would still be too much risk involved. This essay is not meant to promote his clinics in any way. I am using him as an example of how a non-pharmacologic intervention can have real medical effect for certain conditions and in certain patients.

The way I would advocate using placebo medicine is to do it with a full understanding of the neuroscience behind what you are actually doing. That way patients can be chosen better, bad outcomes can be eliminated, nobody gets ripped off, and it can be done without deception.

OK, I know, that is kind of a pipe dream but, hey, I actually fancy myself as more of a theoretical psychiatrist. lol