What do you think?

What do you think that I think?

Here is a link to a site that claims alternative medicine can treat all kinds of afflictions: Natural Healing and Wellness Center, LLC, Aurora, Co.

Here is a link to a site that makes a compelling argument that alternative medicine is hundreds of thousands of unproven treatments that may cause harm directly or indirectly: Science-Based Medicine

Lauren Walker is a Cambridge-based free-lance science journalist. She is neither a physician nor a supporter of alternative medicine. She seemed to me to have an open-minded approach to this subject. If you read this brief piece she wrote recently it will get you started on your quest to understand this debate. Can science and alternative medicine shake hands? -Lauren Walker

Ms. Walker concludes with this statement:

With fundamental principles in conflict, a consensus–beyond the basic agreement that treatments should be safe and effective — may be unattainable in this field.

I would delete this concluding statement and explain the neuroscience of how and for what complementary medicine works. Here is what I would say:

As a medical physician I must say that the vast majority of all the stuff that alternative, complementary or integrative folks are saying is just BS. However, when I look at sick patients there seems to be a lot of evidence that points to the conclusion that the use of complementary ideas, no matter how generally bogus those ideas may be, improves outcomes. How can we explain that?

The explanation is a bit complex so please bear with me.

Before I continue I want to start by addressing a deep fundamental idea that I think filters the goggles through which people think about medicine. It is the idea that logic is the best way to think. Logic is not the default program that evolved in the human brain and it is not the best way of thinking for a species whose goal is to survive.

In order for logic to produce an accurate conclusion its premises must be accurate. It is hard to have accurate information about our complex environment. It is a better idea to think using the logical fallacy called post hoc rationalization. As it turns out, this is our brain’s default program. This is the kind of thinking humans do really well.

We make an observation, then we make up a causal explanation after the fact. This rationalization has a “probability” of being accurate. We can often get this probability up pretty high and it happens outside our conscious awareness. Our brains integrate sensory input in a manner that is unique in the animal kingdom and this input is processed together with emotional input and memory storage. The result is that we have “gut instincts” that are often better than our more logical attempts at thought process.

The ability to do logical thinking has arisen relatively recently in the course of our evolution and many of us can’t, or don’t want to, do it. It does not feel as good in the gut. Most of us are more comfortable thinking in a way that is in line with how we are programmed to think.

Here is an example from the animal kingdom of what happens when you don’t think or behave in the way your brain is programmed.

Here is a picture of a parrot who is not allowed to behave in the way it was programmed. 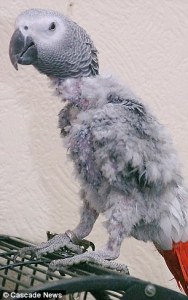 Here is a picture of a parrot who is allowed to behave in the way it was programmed. 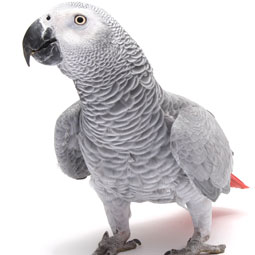 Those of us who are capable of thinking logically and have trained to be able to do it and who have access to some reasonably accurate premises arrived at through things like the placebo controlled double blind study stand in opposition to those who are thinking like a human. Who is right?

In the past 10 years we have learned things about neuroscience that we did not know before. We now have some new Intel and the debate is fundamentally different. The issue is not whether ginko bilboa treats dementia or high blood pressure or menopause, the issue is whether or not there is a science to the way that a holistic practitioner provides an inert therapy like ginko bilboa to a patient that results in medical benefit.

I have heard MDs say that there is nothing about the way alternative practitioner’s interact with patients that those of us in mainstream medicine would not want to be able to do. The real problem is that health care is reimbursed in a procedure oriented way and not in a “spending time with patients” way. That sounds reasonable but there is a point they are missing. It is not just that the alternative practitioner spends a larger quantity of time with patients. It is that there is actually a science to the manner in which they spend time with the patient.

There are commonalities in the way various alternative practitioners communicate with patients. When you investigate these commonalities they turn out to correlate with the kind of information that our brains are programmed to easily understand. In other words, alternative medicine ideologies are designed to play our brains like you play a piano.

Complementary ideologies pay little attention to logic or science when evaluating a treatment but they pay a lot of attention to how they talk about or how they present a treatment or a treating philosophy. This aspect is consistent across a broad range of alternative disciplines. They seem to shape their treatment based on how a human brain processes information and not so much on how a condition needs specific patho-physiological intervention.

If you are a member of the species Homo sapiens then you need to be bonded in a social group and communicate with complex language. You need to hunt and gather and mate for life and be altruistic to the in-group and mistrust and prepare for combat with out-groups and sing and dance and so on and so on. Complementary medicine is all about getting humans who live in modern complex agrarian societies to do behaviors that were programmed into us when we were hunter-gathers so that we can be as healthy as possible.

One thing that makes it a bit complicated is that our time as hunter-gatherers encompasses only the past six million years or so. Before that we lived in hierarchical groups with an alpha male and evolved a lot of selfishness. Now we live in complex agrarian societies that have solved many of the survival issues so that we can do whatever we want and still survive.

Most of us are going to feel the best when doing what we are programmed to do. For most people that includes egalitarian social behavior. For others, that includes some selfishness left over from a previous epoch. Evidence based medicine allows us to step out of our innate programming and do logic. This can help us find the best antibiotic to treat a particular bacteria but often fails to promote us doing the kind of social behavior that will keep us the most happy and healthy in the first place.

One final point. Our brains are not made of silicon like your MAC or your PC. Thinking is done with chemicals and these chemicals control everything you think or feel and all bodily responses to anything that happens. Our brains are connected with other brains and with the environment through sensory perception that is turned into chemical communication. If I call you an “idiot” you feel something bad in your gut and that is a result of my words causing a change in your brain chemistry.

Here is the really amazing part. How I talk to you and how I treat you and what you experience is seen through your Homo sapiens lenses and your brain is pre-programmed to respond to certain stimuli in certain ways. There is a science to the way a holistic healer communicates with you in order to cause your brain to produce compensatory responses such as producing naturally occurring opioids to reduce pain.

This type of treatment can only work for compensatory things like pain and nausea or maybe to reduce depression or anxiety or to help with sleep and things like that. Things that cause your body to move back in the direction of returning to homeostasis. It can help directly with these few things and with anything that is related to a psychological illness like a somatization disorder. Any diagnosis that has a relatively high level of psychological stuff in its etiology like chronic fatigue syndrome, hypochondriasis, migraines, PTSD, fibromyalgia, etc. can respond well to the placebo effect of causing a change in brain chemistry through the right kind of social interaction.

I suggest that we don’t look at alternative medicine as a way to know the empirical truth but as a mechanism to get us to behave in a more healthy way. If we do this, then the contentious arguments on both sides all fade away. When I say the term that I invented and titled this website, “Placebo Medicine,” my intention is to suggest exactly that.

What do you think now? Let me know.